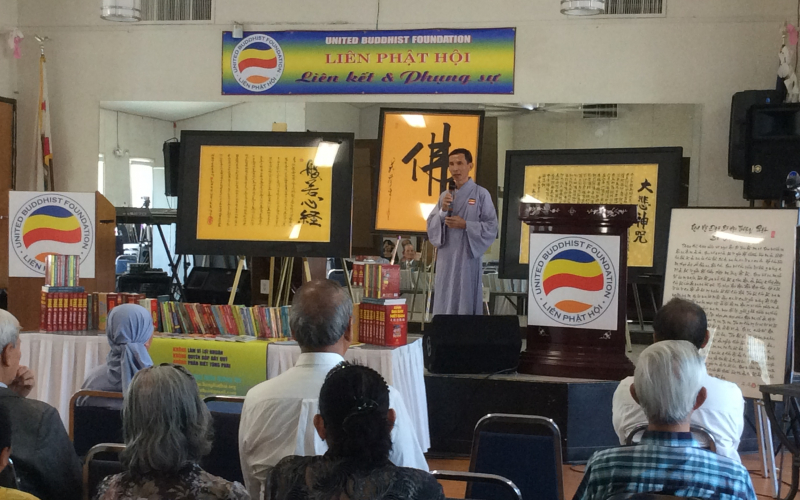 On July 30, 2016, at the Bayside Community Center in San Diego, CA, the United Buddhist Foundation held a book introducing ceremony and introduced the activities of the United Buddhist Foundation (UBF), including the propaganda Buddhist channel on the website rongmotamhon.net over the past ten years and will officially become lienphathoi.org - official website of the UBF, works in parallel with the English website at unitedbuddhist.org.

The program runs from 2:30 PM to 7:00 PM. Speakers include: Dr. Phan Man from Sacramento, the host, Phan Trung Kien, San Diego, Founder And the director of the Inter-Buddhist Association, who is in charge of introducing the activities of the UBF and Nguyen Minh Tien, General Secretary of the UBF, introduces the content and functions as well as instructions on how to use the website Rong Mo Tam Hon (rongmotamhon.net).

The program also had the present of singers: Hong Hanh, Suong Mai, Thanh Phuong and many other singers.

Guests invited are offered with the book "Hanh phuc la dieu co that" by Nguyen Minh Tien and take snacks while enjoying the entertainment.

The program is broadcast live through Youtube and Facebook channels to serve viewers around the world, especially readers in Vietnam. This event has contributed to the widespread introduction of the activities of the UBF as well as the content of Buddhist website Rong Mo Tam Hon to many people.