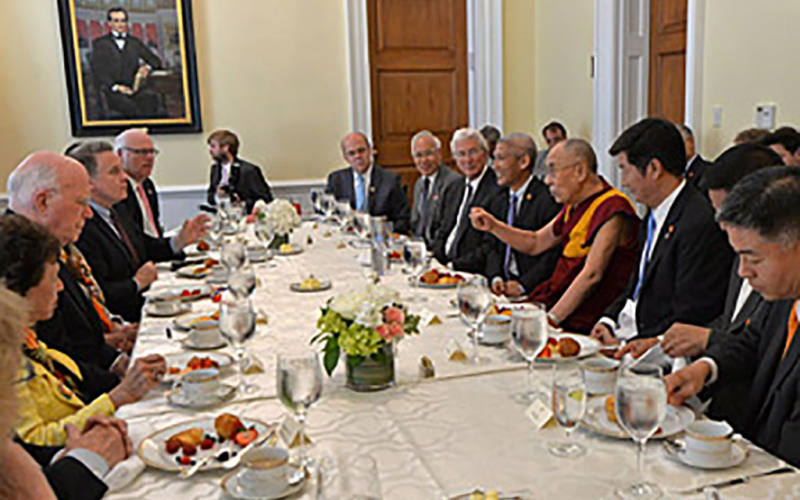 Washington DC, USA, 14 June 2016 - It was a bright summer morning today as His Holiness the Dalai Lama drove down Washington’s broad and leafy avenues to the heart of government on Capitol Hill. He was met on arrival by old friends House Democrat Leader Nancy Pelosi and Senator Patrick Leahy, who escorted him to a meeting with the Senate Foreign Relations Committee.

Later walking to Nancy Pelosi’s office meant crossing the rotunda—currently undergoing renovation. The area was filled with visiting members of the public who fell respectfully silent in their surprise at seeing His Holiness.

Meeting with the US Congressional Leadership, His Holiness said:

“Congress has expressed staunch support for our cause. We are not seeking independence because we don’t want to enter into confrontation with our Chinese brothers and sisters. However, Chinese documents reveal that in the 9th century independent Tibetan, Chinese and Mongolian empires flourished. What we seek now is a mutually beneficial solution to the problems between us. Buddhism in both China and Tibet derives from the Nalanda tradition, but the transmission to Tibet was far more comprehensive and is therefore worth preserving. We are also concerned about the ecology of the Tibetan Plateau.”

Indicating Dr Lobsang Sangay sitting beside him His Holiness said:

“The Sikyong here has just been re-elected for a further five years. We Tibetans in exile are implementing Democratic principles to show the leaders in Beijing what democracy is about.

“We consider Tibet to be occupied land, yet we are still not seeking independence. However, at the same time it is a reality that Tibet is not a part of China. Please continue to give us your support. We very much appreciate it.”

His Holiness concluded his address with a summary of his three commitments to the spreading awareness of basic human values as a source of genuine happiness, the promotion of respectful inter-religious harmony and the protection of the Tibetan people’s identity, as well as the culture, language and environment of Tibet.

“Our bipartisan luncheon with Speaker Ryan is a tribute to the deep respect His Holiness enjoys on both sides of the aisle for the message of peace, compassion and responsibility he brings to the world. Every time His Holiness visits the Capitol, he reminds us that ‘change comes through action,’ and that Congress must do our part to help the Tibetan people in their fight to preserve their language, culture and religion.”

In his brief address, His Holiness said:

“Both houses of the American government are a source of hope and inspiration. The Speaker is young and able and I’ve known Nancy Pelosi for many years; our friendship is unchanging. As I have said before, our supporters are not so much pro-Tibet as pro-justice.”

In the afternoon, His Holiness attended a meeting with members of the International Campaign for Tibet (ICT), which, founded in 1988, works to promote human rights and democratic freedoms for the people of Tibet. Richard Gere, the Chairman of ICT, told His Holiness that he wanted to talk to him about how he became the man he is and he replied:

“I arrived in Lhasa at the age of five and about two years later began my studies with memorization. I was a sharp-minded but relatively lazy student. When I was 16 the People’s Liberation Army crossed into Eastern Tibet and the then Regent passed political responsibility to me. In 1954 I went to China where I met almost all the top leaders of the Chinese government. In the five or six months I spent in Beijing I think I must have had 30 meetings with Chairman Mao. I learned about Marxism and was attracted to ideas of socialism and internationalism.

“When I came to India in 1956, the experience was quite different. India was open where China was a closed society. With Nehru’s encouragement I returned to Tibet, but in 1959 escaped to India as a refugee. Nevertheless, this gave me the opportunity to meet all kinds of different people.

“In Tibet I thought that Buddhism was best. I’m a student of the Nalanda tradition making extensive use of logic and reason, cultivating a healthy scepticism. In exile I’ve come across many followers of other religious traditions who have dedicated themselves to others’ well-being on the basis of their faith. All our religious traditions include the practice of love and compassion, therefore it’s proper to regard them with respect.

“Since my childhood I’ve had a curiosity about science and technology. When visiting hydroelectric plants in China my tutors were bored, but I was fascinated. Chairman Mao noted this and at our last meeting commented that I had a scientific cast of mind, adding that religion was like opium. I think that if he were here today he might still say that about religion that is confined to faith alone, but he might also recognise the scientific aspect of the Nalanda tradition.”

His Holiness remarked that as a refugee in India there was no longer any formality or protocol to follow, which made him more confident. This confidence was reinforced by his practice of altruism and understanding of dependent arising.

Richard Gere asked what he considered were the prospects for Tibetans when he arrived in India in 1959. His Holiness replied that they arrived in April and one of the first priorities was to move Tibetans to cooler places in the mountains. However, road building was the only work available. He said he envisaged settlements where communities could be created to ensure Tibetans survived as a people.

He recalled that soon after taking responsibility, in 1952, he had set up a reform committee, but the Chinese put obstacles in its way because they wanted to see reform in their terms.

When Gere asked what missed opportunities there had been over the years, His Holiness told him:

“Almost none. In the ‘60s some officials began to doubt whether it had been right to escape, but once the Cultural Revolution broke out they realized it had been the right decision. The way I take decisions is first to discuss things among my human colleagues. I discovered in Tibet that where officials could be overly discreet, servants like the sweepers were generally much more frank and straightforward. Generally I seek a wide range of opinion and I’ve also employed ‘mystical methods’ to confirm the decisions we’ve reached. Still, I don’t think any decisions have been taken that should have been different.

“In 1973 I visited Europe for the first time and began to talk about the need for global responsibility. I entered into discussions with scientists. At about the same time I began to encourage classical studies in our nunneries and this year will see the fruit of that when the first nuns are awarded Geshe degrees.

“I began to realise that knowledge of the mind and emotions was something that could be of benefit to the wider world. Considering that the literature translated into Tibetan in the Kangyur and Tengyur collections could be categorized as dealing with science, philosophy and religion, I have requested that scientific and philosophical materials from them be gathered, compiled and now translated into other languages.

“I’ve also observed that existing education needs to be improved with greater focus on human values and inner peace. As a Buddhist monk I spend five hours a day in prayer and meditation. Prayer is of value to the individual, but on its own is not an effective way of bringing about a better world. We need to take action instead.”

When Richard Gere asked about the prospects for dialogue with Chinese authorities, His Holiness told him:

“The last meeting was in 2010. Since then the Chinese side has made clear they have little interest in dealing with our organization. Some reports say that after the 2008 crisis Hu Jintao was advised never to let the Dalai Lama come back. Since we’ve waited 57 years, we can wait a little longer. The determination of the people of Tibet is undiminished.”

“You have a lot of friends here,” Richard Gere said, “who are committed to helping Tibetans inside and outside Tibet. How can we help you?” His Holiness responded:

“In whatever way you can, try to contribute to my three commitments: spreading awareness of human values, promoting inter-religious harmony and protecting the culture, language and natural environment of Tibet. I appreciate your help—thank you. Please keep it up.”