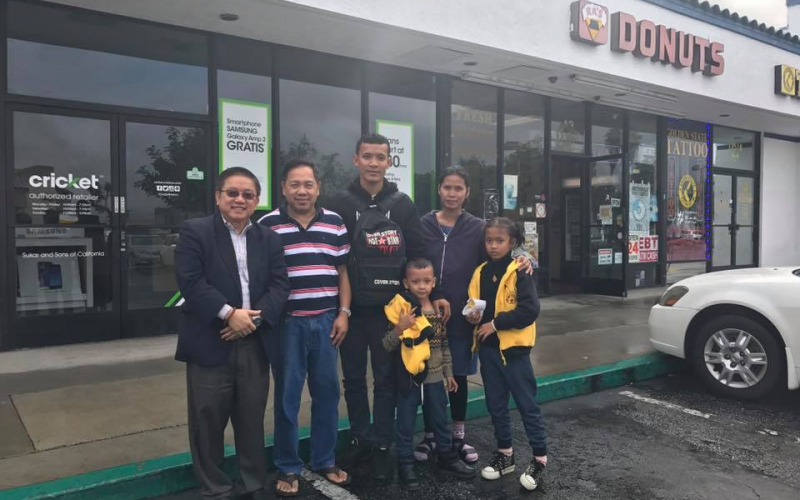 After UBF publicly announce on Facebook the case of Mr. Thach Xuan Hien, a Vietnamese refugee family just arrived in San Diego and temporary help them with the amount of $300, many compatriots immediately responded and contacted to help Hien's family. So, I quickly continued what to do to call for extra help from Vietnamese community in California.

First of all, a 15-minute talk with Thach Xuan Hien was streamed live on Facebook on Friday evening, Feb 17, 2017. After that, many Vietnamese had contacted and promised to help. Mrs. Diana Hoa Ta and her children offer $200, my mother gave $100, and Ms. Khanh Ngo promised to send gifts to help. Especially Mr. Linh Nguyen, journalist of the Nguoi Viet Online and the daily newspaper released on next morning Saturday February 18 immediately reported to Vietnamese community everywhere. Thereby, Saturday afternoon after working hour I decided to take Thach Xuan Hien's family to Little Saigon to meet other people and and get further information to the Vietnamese community. The trip also to thank the BPSOS organization and meet the journalist of Nguoi Viet daily newspapers as well as the benefactors who helped Hien's family come to San Diego on Wednesday afternoon February 15, 2017.

Prior to BPSOS Office, we have stumbled into journalist Vu Chung. After hearing a brief introduction about Thach Xuan Hien, Vu Chung took immediately action by making news with his iPhone and send instant messages to the news agency that he is working for. Next, we went to the Nguoi Viet newspaper office, 30 minutes later than expected, and met with Dinh Quang Anh Thai, Linh Nguyen, Ngoc Lan and many others in the editorial office with a very friendly environment. We also took a look at the Vietnamese news released with this information on the front page. Meanwhile, Tran Duc Thong, a compatriot from Irvine called to say that he just read through the newspaper and wanted to help Hien's family with $200 but did not know how to contact. We immediately told him that during the period from 4:30 to 5:00 PM we are present in the Nguoi Viet Newspaper's Office. He immediately came and gave an envelope with $200 as mentioned.

Ms. Ngoc Lan also gaved Hien's family an envelope of $200 as a gift from the Nguoi Viet newspaper to congratulate his family has settled in America. She also said next Wednesday (2/22) she would come to San Diego and bring a personal gift from her and her friends. Mr. Thanh Tam also brought a number of items, clothes to help Hien's family while we were talking in the living room of the Nguoi Viet newspaper.

After leaving the newspaper editorial office, we invited Thach Xuan Hien's family to attend a meeting of our friends held at Mr. Huynh Son's house, Garden Grove. It's a meaningful meeting with our friends who studied closely together for more than 30 years, especially with Mr. Dieu Cay, Linh Nguyen, Si Tran, Tran Chi Phuc, Kim Quy from San Diego and many other friends of Mr. Huynh Son. Ngo Thanh Nam said happily that so it is present in this meeting have 3 generations of refugees: our group had lived here more than 30 years, Mr. Dieu Cay was almost 3 years, and Thach Xuan Hien's family has been 3 days in this country...

In the evening, Thach Xuan Hien's family slept overnight in the office of the United Buddhist Foundation in Westminster. In the morning, we got together to worship Buddha and prepare for the first Sunday of his family on this free country.

We last visited the Phuoc Loc Tho, met with Mr. Hung, a fellow Vietnamese who could speak Khmer language and a Donut shop owner. Mr. Hung had welcomed Thach Xuan Hien at the international airport, LAX, but had not had time to talk, because of the AFAA had to bring Hien's family to San Diego on Wednesday afternoon (February 15th, 2017). Mr. Hung immediately made a short clip in Khmer language to call for help to Thach Xuan Hien's family, posted on Facebook. Mr. Hung also introduced us to a Cambodian temple in the city of Long Beach. Due to the busy business, he and his wife could not accompany us.

We rendezvous with Kieu Dung at Hue Quang Pagoda to get some clothes and medicine and baby toys for Hien's children. We met on time at the temple courtyard, and got 2 bags of clothing carefully prepared. The children also excited with some toys brought by Kieu Dung. The cheerful smiles of children made all of us happy. On the way to the journalist Uyen Vu's house, we also stopped by to attended a Happy New Year ceremony of the Vietnamese Buddhist Youth Asscociation of Southern California (GĐPT Miền Quảng Đức). Kieu Dung entertained us all a delicious vegetarian meal. Next, we went to Uyen Vu's house, a refugee family came to the United States about 2 years ago.

I noted that Thach Xuan Hien always carried a small bag but I didn't know what papers in it. Mr. Uyen Vu's wife had the experience of a refugee from 2 years ago, so she helped Thach Xuan Hien to review all papers to make sure what should be done next. In the bag were receipts of renting a one-bedroom apartment for $980 per month, plus other miscellaneous things which bought from the initial amount of $3,900 for helping his family from AFAA. The remain balance of $252 to the end of March. Ms. Diep gave her phone number to Hien and told him to call her anytime if have any questions or just for help.

Also on Sunday, I received a call from Mr. Nguyen Van Luc, President of the Vietnamese Community of San Diego, wanted to see me at 4:30 pm and a senior named Vuong Minh Quang and his daughter Xuan Anh. They had come to help Thach Xuan Hien but didn't met him at home. So we made an appointment at 4:30 to 5 pm to meet them.

While our car ran from Orange County to San Diego, Thach Xuan Hien appealed me to stop to take some photos of the Pacific Ocean. His family have expressed joy before endless immensity of space free after days of imprisonment and hardships before reaching this country. Natural beauty spread with gentle birds and we all are together in joy of a free life.

We got home 15 minutes earlier than the appointment and met with the representative delegation of the Vietnamese Community of San Diego, including Mr. Nguyen Van Luc, President, Mrs. Dang Kim Trang, Vice President and Mr. Dung Lam. After discussion, we learned that Mrs. Kim Trang had served in the Catholic Charity Association over 23 years in helping the refugees before her retiring. The delegation presented Thach Xuan Hien's family $200 and some utensils necessary. They notice that there's no microwave in the house, so they promised to bring one for him tomorrow, and also promised to try to help Hien's family in the days to come.

Within 20 minutes of conversation, Mr. Tho from Linda Vista came with an envelope of $100, along with clothings and congratulated Hien's arrival in America. He had heard this information via radio and newspapers and came to help.

The most touching moment is when the senior fellow, Mr. Vuong Minh Quang, accompanied by her daughter, Xuan Anh, immediately after reading the news reports had come in the morning, but not met us because we had not came to Hien's home yet from Orange County. Mr. Minh Quang gave $100 and expressed a fervent feelings of a refugee wanted to help another refugee, congratulated Hien's family to escape to a free country. In the end, Mr. Vinh suddenly appeared, voluntarily offered to help driving Thach Xuan Hien's family to wherever needed, because they lived near that.

It was emotional to see every Vietnamese graciously outstretched arms to welcome a refugee family has just arrived to this free country. I could feel a tear when recalling 35 years ago, when my family first settled in Tulsa Oklahoma...

Congatulation to Thach Xuan Hien's family! Let's try to stabilize in this early stages of life, so tomorrow we will continue to welcome and help other refugees like we are today. Happiness is a real thing! After a day of effort, I'm tired but felt in my heart filling with the warmth of love in the last 24 hours spent every lovingly help Thach Xuan Hien's family.

The night was too late, I went to sleep late after a long tiring day but I was sure I would have nice dreams and smoothness, because love and happiness were flooded inside me.